Posted on October 9, 2012 by thelivingfashion 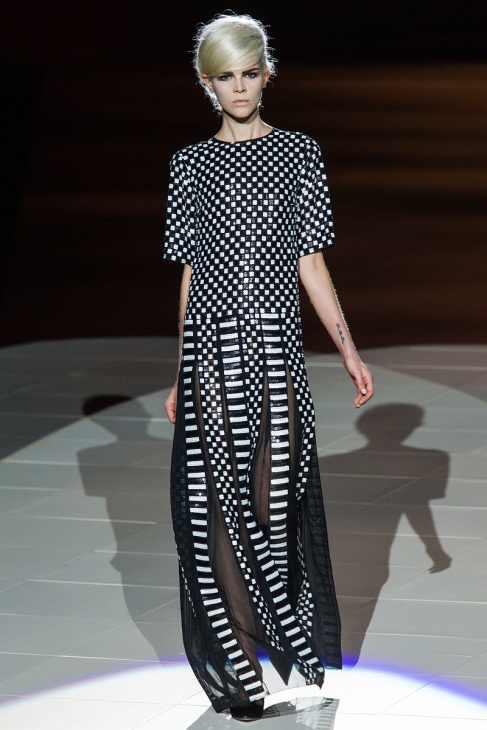 “Young girls need to learn that sexiness isn’t about being naked,” declared Marc Jacobs after his Spring 2013 fashion show.

It was so simple. Back to those notes: T-shirt, coat, slip, skirt, suit, bra, etc., etc., etc. No embellishment needed. Jacobs distilled a radical moment of transition in style, between the suited young ladies of the early sixties and the free spirits of the later part of the decade, the kind of woman Edie was, passing from preppy-proper to pilled-out style icon in her patent leather and leopard spots, petaled hems and smudgy mascara-ed eyes. And stripes. So many stripes, parallel lines, black and white and sequined, like Lou Reed lyrics coming to life. But it’s the genius of Jacobs that something that was so powerfully evocative of the past didn’t seem retro or nostalgic. This is partly because his approach to anything that came before is so obviously cavalier. Look at the ease with which he renders his own immediate past—as in last season, with its OTT headgear—quite literally old hat.

More to the point, it’s also because the stripped-down nature of these clothes just looks right right now. Ruby Jean’s T-shirt? Obvs. But Jamie Bochert’s jumpsuit of sequined stripes had the kind of linear immediacy that would surely generate a why-didn’t-I-think of-that? moment for other designers. And, as far as radical moments of transition go, all those skewed suits with their visible bras and hip-slung skirts felt like the slyest assault on Republican propriety that fashion is likely to mount this election year. Change from within? It wouldn’t be the first time Marc Jacobs insinuated subversion into the heart of high fashion.

We love fashion and travel!!
View all posts by thelivingfashion →
This entry was posted in fashion shows. Bookmark the permalink.