Posted on April 24, 2013 by thelivingfashion 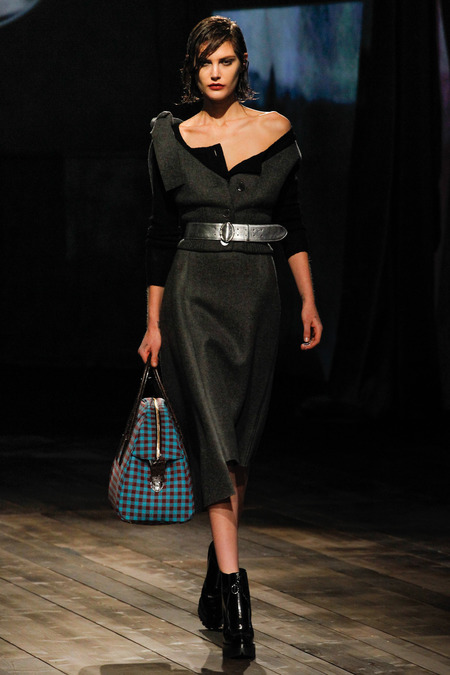 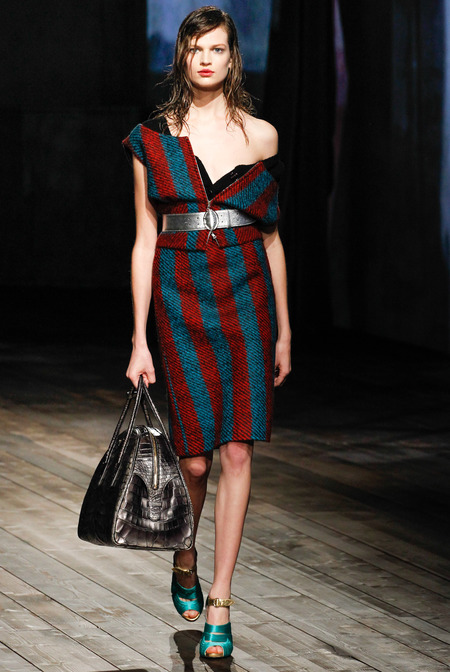 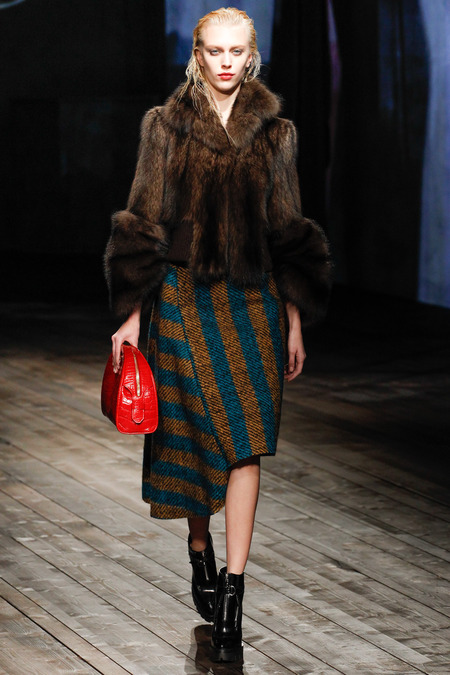 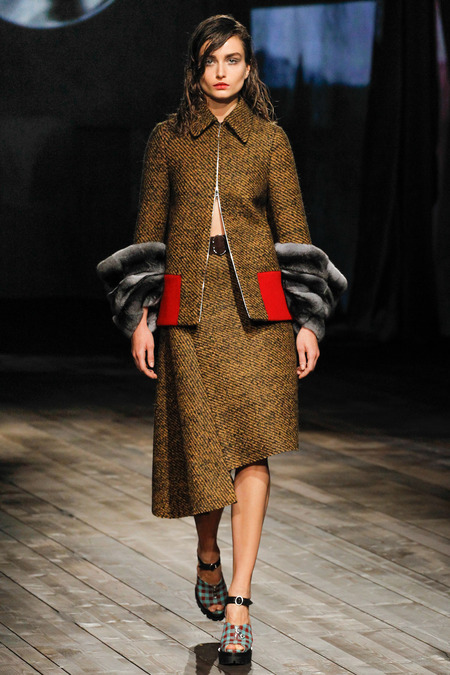 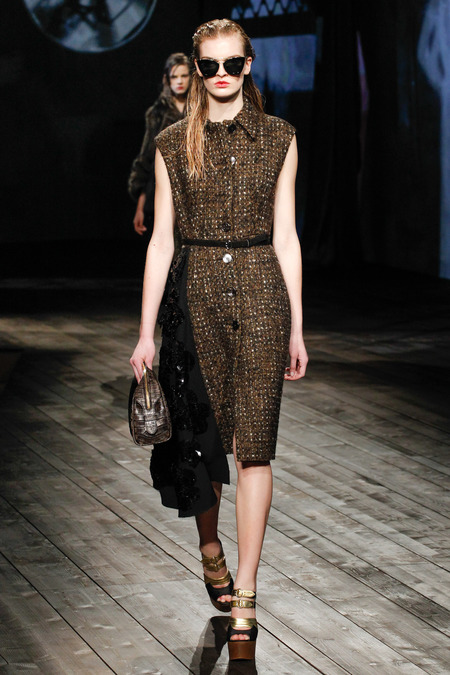 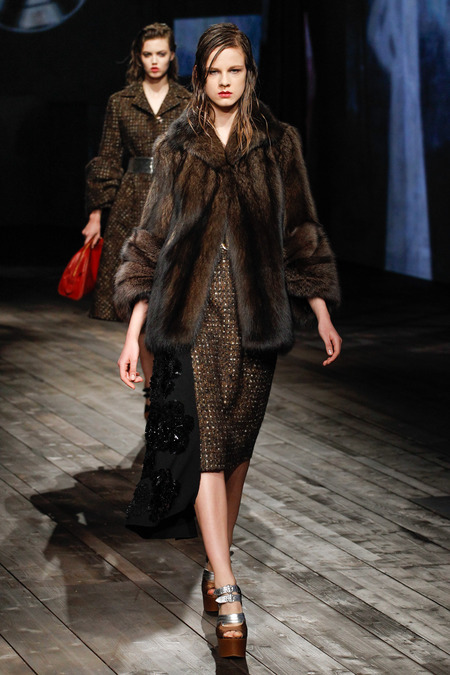 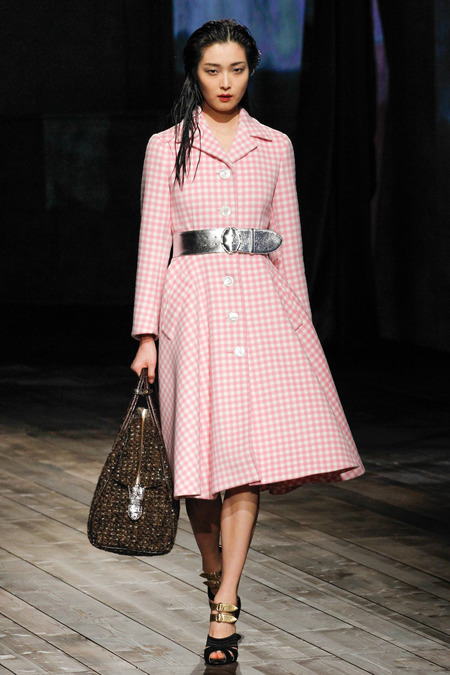 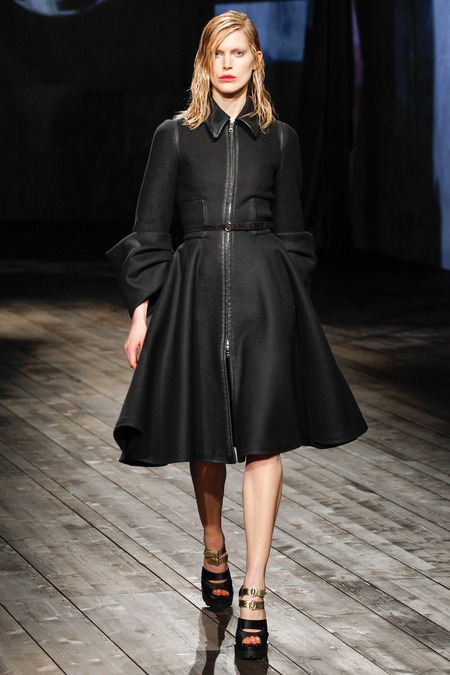 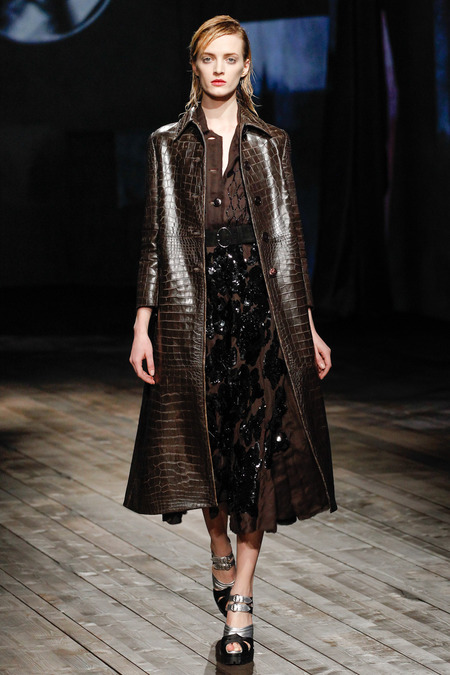 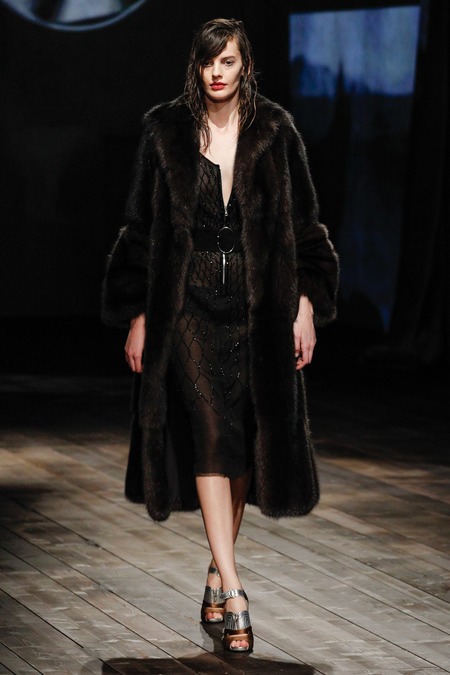 There was some consensus after tonight’s revelatory Prada show that Miuccia had paraded her greatest hits. It’s easy to see why people would think that. Some silhouettes and fabrics we recognized. Same with shoes (particularly the lug sole). The appetite for decoration signposted a signature Mrs. P herself defined as “a mix of rich and poor.” And the casting included some much-missed faces from the Prada sorority (including the very welcome reappearance of Kirsten Owen, Liisa Winkler, and Esther de Jong).

Miuccia’s own take on the familiarity factor was typically laconic: “It’s a lot of things I really like.” If that meant the collection wasn’t one of those move-the-goalposts breakthroughs that Prada has mastered over the years, it also guaranteed this was one of her most personal and emotional offerings to date. The designer can be a perfect sphinx, but here she seemed ready to open up, to admit her frustrations and acknowledge her obsessions.

It was all there on the catwalk. Just as with her men’s show in June, an artful back projection went live as the show started. The wheeling flocks of birds and irritated black cat were familiar from that earlier presentation, but there they were part of a scenario designed to underscore the “normal,” and here Miuccia was adamant with her womenswear that “‘normal’ was not the right thing to do.” Instead, a film noir mood: a spinning ceiling fan, shadows cast by blinds, a woman silhouetted in a doorway, waiting for…? Then, into that atmosphere pregnant with mystery stepped a woman in gorgeous disarray, a kissing cousin to the lush, unhinged beauty played by Laura Harring in David Lynch’s Mulholland Drive. And thus did Miuccia launch her exercise in fashion as cinema. “Stories of women and life,” she said later. “Who cares about the dress?”

Except that her collection proved the power of the dress as an accessory to a life. “Through cloth, you can really make movies,” the designer conceded. The music from Betty Blue was on the soundtrack as an aural cue: fixation with beauty, romanticism run riot. “I’m obsessed with impossibilities,” she continued. “Romanticism is forbidden. It’s not ‘modern.'” Tell that to David Lynch, or Alfred Hitchcock, or any of those filmic geniuses who stepped outside the “modern” to delve into the truly timeless with their celluloid paeans to those lost souls who sacrifice everything for obsession. And that’s where Miuccia Prada went today. If fashion is ultimately an emotion, she pinned it to the wall for good and all.

We love fashion and travel!!
View all posts by thelivingfashion →
This entry was posted in fashion shows, lates trends and tagged aviation, beauty, celebrities, fashion, style, transportation. Bookmark the permalink.