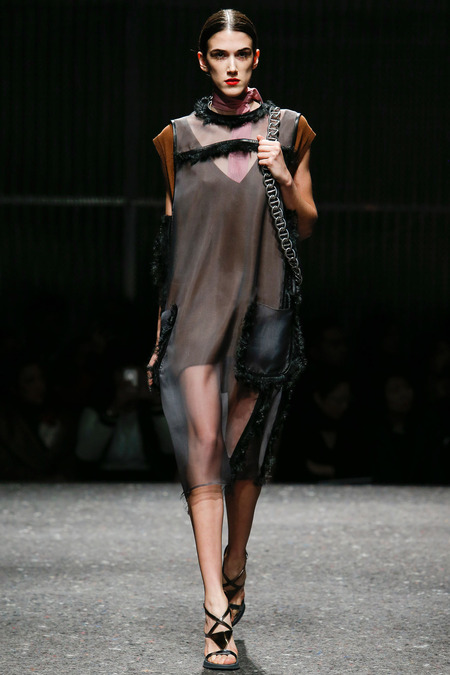 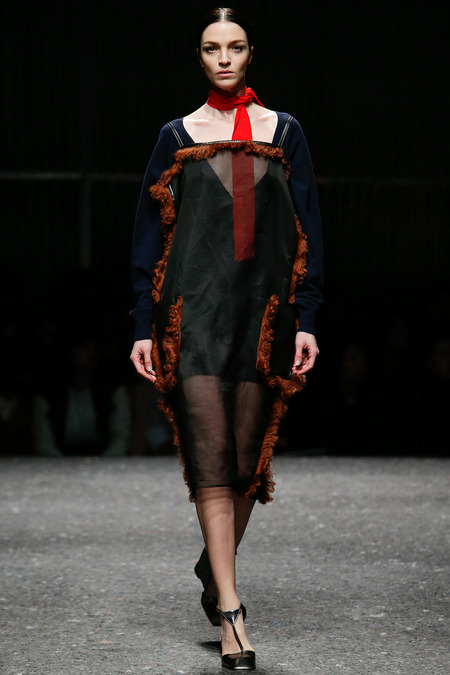 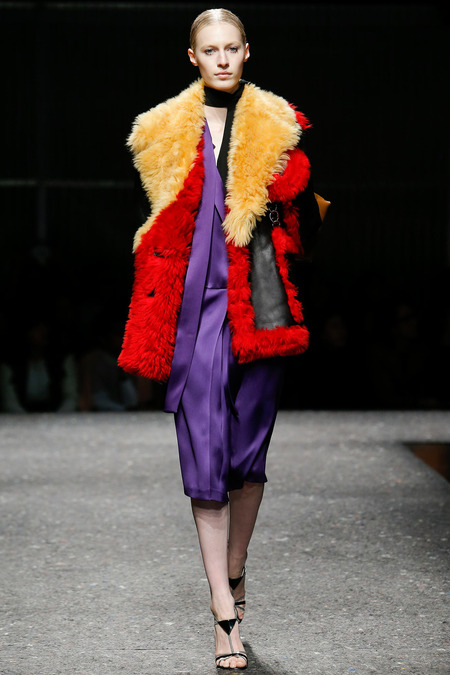 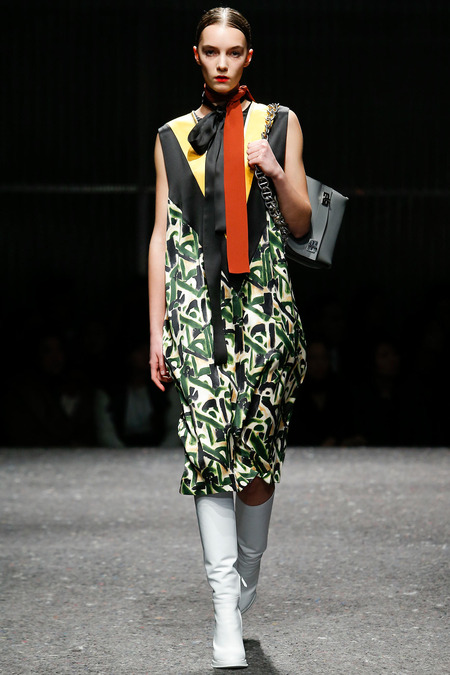 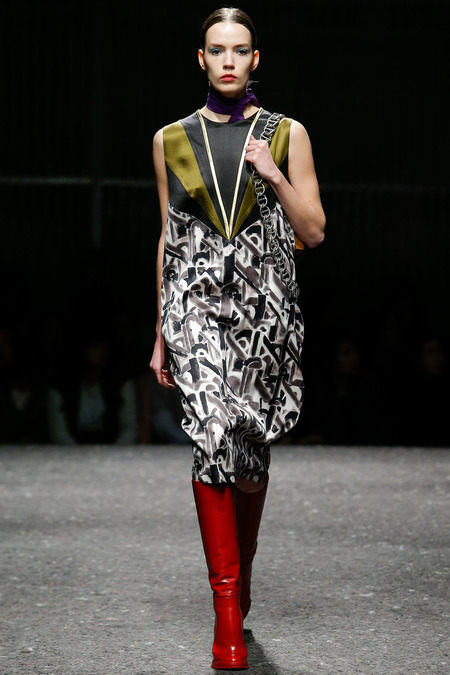 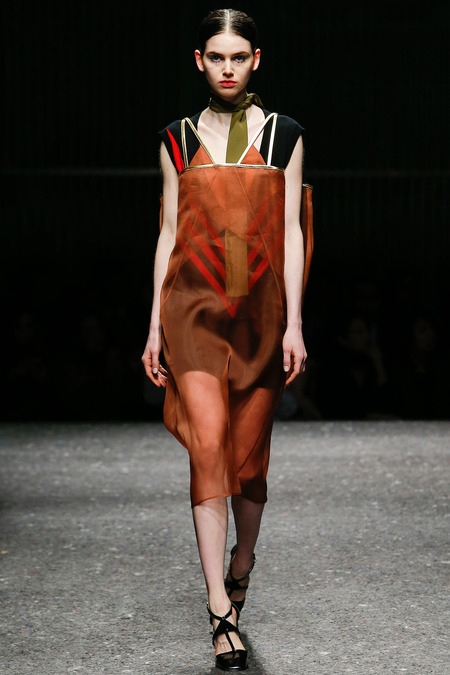 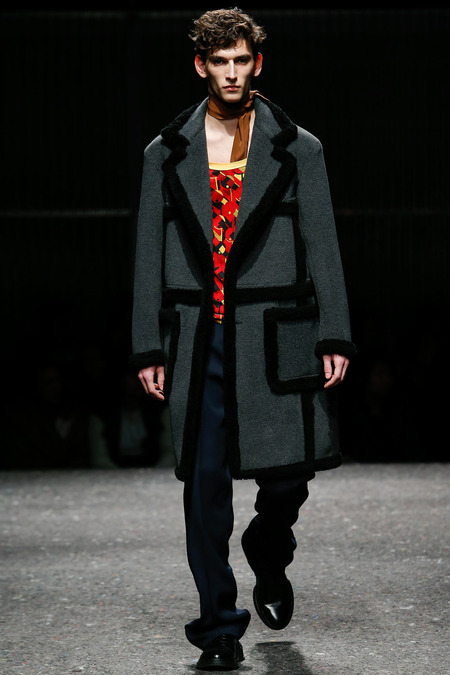 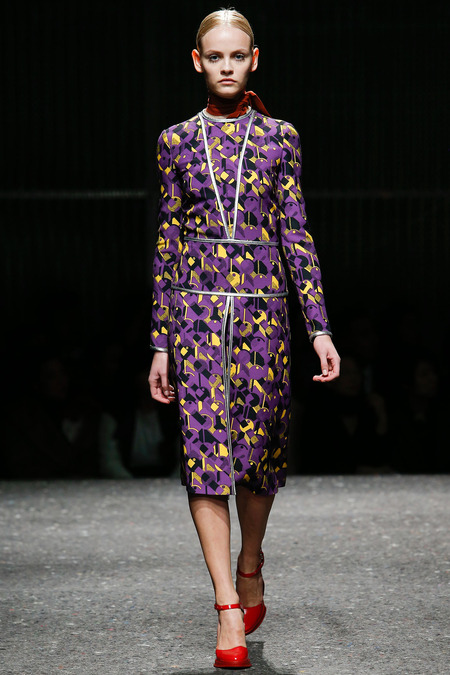 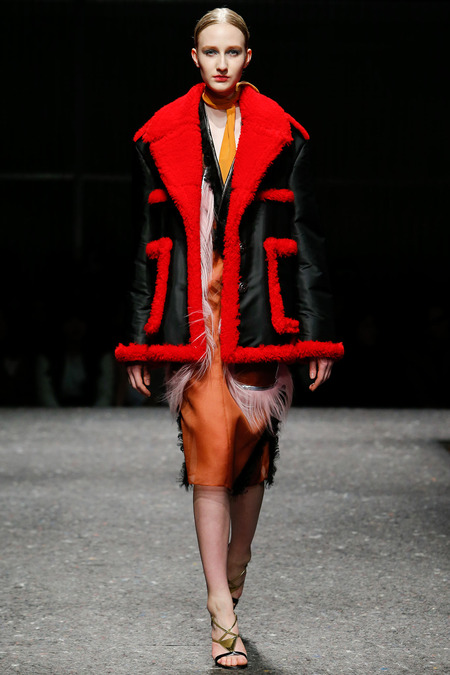 A handout at the Prada presentation tonight equated a fashion show with a theatrical performance: characters, space, costumes, music, and lights creating an enveloping experience. The small, square invitation sealed the deal, summoning us to “Act 2,” the first act being the men’s show in January, for which Miuccia Prada claimed inspiration from Germany’s cultural avant-garde, in particular choreographer Pina Bausch, artist Joseph Beuys, and director Rainer Werner Fassbinder. Then, the set was a stark alternative-performance space à la Bausch, encased in felt à la Beuys, and the collection’s impact was low-key and obtuse. Now, just over a month later, the set remained exactly the same, but Miuccia had honed the inspiration, focusing on Fassbinder, watching all his movies to the point where she was prepared to announce that she had drawn directly from the costumes in his 1972 film The Bitter Tears of Petra von Kant. “Your culture is done by your past,” she said. “History is there for a reason.”

Miuccia and Fassbinder, who died in 1982, were more or less of the same generation and were shaped by the same social and political forces, so it was easy to see the appeal of the director for the designer. “His humanity, his love of culture, his love of telling a story,” she enthused. “I had so much fun watching all those movies. They gave me a relationship with something less fancy, more dark.” That clarified her new collection’s obsession with shearling. “The opposite of rich,” Miuccia called it, even though, given the volumes and extravagant shades she used, it was anything but poor. She laid it over sheer dresses, the tough and the delicate together, a longtime Prada obsession.

But there was another facet of Fassbinder’s creativity that infiltrated this Prada collection to great effect. Petra von Kant connected Miuccia with an old Cecil B. DeMille version of Cleopatra, starring Claudette Colbert, which she became convinced had been a huge influence on Fassbinder. And that got her thinking about the continuities of creativity that run through culture (DeMille begetting Fassbinder begetting Almodóvar, for instance). Staying in tune with the German avant-garde subtext for a minute, the strong 1920s/1930s strand in Miuccia’s new designs—the slink of sheer shifts, the Art Deco prints, the Deco-influenced silver tracery, the chevron necklines, the Metropolis wedge heels—evoked the Weimar era, where avant-gardism exploded over ground. Dietrich’s Lola in The Blue Angel was an icon of Weimar. Fassbinder updated her in his own 1982 movie, Lola. Tonight Barbara Sukowa, the star of that film, was performing live with strings, wind instruments, and the soundscapes of Frederic Sanchez. What was she singing? The songs of Kurt Weill, the genius composer of Weimar.

The perfect circularity of the whole presentation was an exact embodiment of Miuccia’s own fascination with the way that ideas roll forward through the ages, finding new life and new modes of expression. Clothes as ambassadors for ideas? That is more than enough to be going on with as you flick through the racks in a Prada store next fall.